Southern New Hampshire University (SNHU) was founded in 1932 as a two-room business school, specifically focused on accounting at that time. The organization launched its first online program in 1990 and has been an innovator in higher education ever since, with international and national programs and robust support services for its 150,000+ learners, making it unique in the market. After becoming a distributed workforce for the first time due to the pandemic, the organization needed to create the first of its kind, university-wide recognition program to reinforce its culture and values. 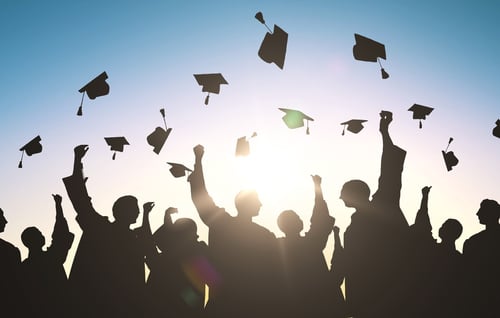 In early 2020, Jenn and her team identified that recognition was an area of opportunity for the university. The COVID-19 pandemic accelerated the need for a more modernized solution that would help embed a culture of appreciation, especially with this being the first time they were all distributed.

To meet this objective, Jennifer LaFountain, Director, People Experience at SNHU, started looking into recognition programs along with the People Experience Team to better understand what their employees were looking for.

They officially kicked off a project to develop a university-wide program, gathering a cross-functional team of people, with the first task of understanding the current state of recognition at the organization. The team created a “recognition inventory” and held interviews and focus groups to identify what recognition looked, sounded, and felt like for employees day-to-day at SNHU.

All of this feedback validated that SNHU needed a redesign in the way the organization recognized, and two short months later the project became a top priority. 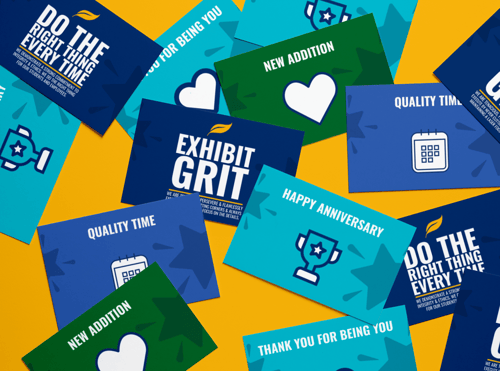 All of the research the team collected supported the idea of having a robust employee recognition program in a distributed landscape, which is what Jenn and team brought to the Leadership Team. As a part of the proposal to leadership, Jenn and team developed a plan to operationalize the program. First, they decided on a phased approach – starting with non-monetary, peer-to-peer recognition as a foundation and the second phase aimed at redesigning the service awards.

Fast forward to September 2021 and the employee recognition program, “Shine,” was born from invaluable employee feedback. Shine reflects SNHU’s employer brand and is an extension of its company culture.

“One of the reasons we love Reward Gateway as a platform and a partner is because of how much control we have over the branding of our site. Our brand is very precious to us and we wanted to honor that. We also wanted Shine to look like an internal website, like it's always been a part of our technological footprint. You would not know that it's an external site and we're very excited about that,” Jenn says.

Alongside the need for a phased approach, the team reviewed their retention data and learned that 52% of employees who leave voluntarily do so within the first three years. The team was missing an opportunity to recognize these employees because the service recognition previously didn’t start until year five. Jenn adds, “We realized that if we were intentional about the changes we wanted to make to the recognition program, we could actually use it as a retention tool to future-proof the organization.”

This led the team to focus on timing, transparency and choice as the three pillars of the recognition program, with a focus on recognizing employee milestones. 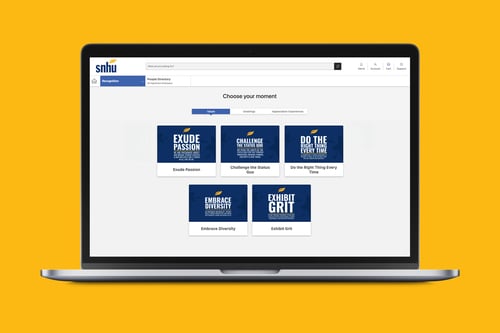 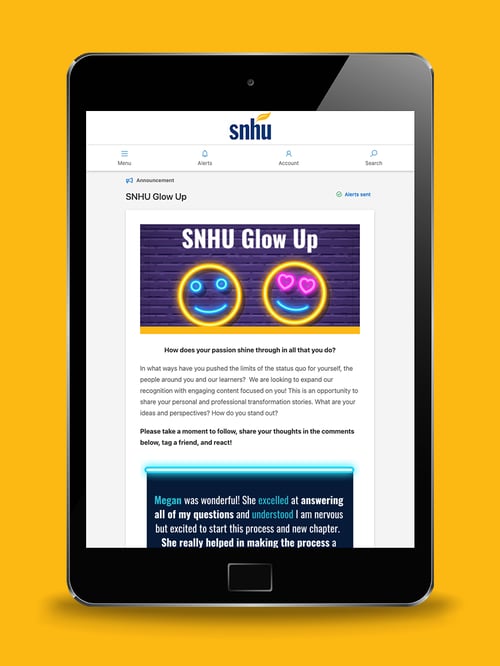 Fast-forward to March 2022, and 76% of the distributed employees have visited Shine to see the great work occurring across the university. In addition, 85% of employees have sent and/or received recognition. There have been over 16,000 eCards sent and/or received since Shine launched, with 57% of those being sent by managers within the organization.

Jenn adds, “One of the big surprises for me personally is that the eCards are being sent more by leaders than by individual contributors. This is a testimony to the fact that our leaders are using this platform and program to help drive behaviors and results on their team.”

Since the beginning of 2022, SNHU has spent over $19k through reward and recognition and issued almost 2,000 awards to employees. Another huge piece to celebrate here is the number of comments and reactions that employees have been contributing to the appreciation and recognition moments within the platform. There have been over 18,000 total likes, reactions and comments on the social recognition wall, helping the team deliver on creating more transparency and cross-functional recognition across the university. “It's just straight up fun to see how many folks are engaging with one another, even on something as simple as sending a thank you card,” Jenn adds.

SNHU was able to utilize the service recognition program as a retention tool by focusing on the three pillars of timing, transparency and choice. After launching Shine, the team saw a 6+ point increase in their annual employee opinion survey related to recognition. In addition, in a pilot group of about 100 employees (whose leader is committed to using Shine weekly), they now have fewer eNPS detractors, which is 8% lower than the university overall. Their eNPS increased by eight points and their overall eNPS is higher than the university as a whole.

While phase three will be focused on monetary recognition, Jenn and team also want to embrace the success that the organization has had and grow what’s already been built. The team is working with senior leaders to help them drive usage within their teams and improve business results using Shine.

One of the more recent developments is an employee onboarding project that focuses on the employee lifecycle and what onboarding currently looks like at SNHU, which Shine is a large part of.

Jenn says, “Our goal is to add Shine behaviors and best practices to our Talent Development programs, at all points of the employee lifecycle. We are also working with our three largest business units to develop custom solutions to drive recognition and usage. Lastly, we are working with internal stakeholders to build fun ways to engage with Shine.”