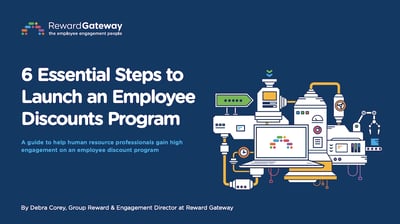 Discover a step-by-step process to launching an employee discounts program, from strategy to communications tactics and the decision-making process.

Causeway integrated its perks into one, single engagement platform after realizing lack of perks awareness from its employees. Within one month of re-launch, 97% of employees were engaged with the platform, and after six months sales increased by 73% and profitability by 35%.

In 2015, Causeway’s flexible perks platform, Causeway Lifestyle, had been available to its employees for four years. An employee survey showed that employees were aware of its perks but the perks platform was no longer achieving the desired level of engagement. Research into the low performance of the platform showed that the Causeway brand and values were not reflected, use of discounts had decreased, and employees believed that wellness and CRS activities were entirely separate from Causeway Lifestyle.

Feedback from employees revealed a perception that the platform offered retail discounts only as other perks were difficult to find. This formed a barrier for the largely male workforce as there was nothing new or different to encourage return visits. Accessing the perks on smartphones and tablets was difficult, too, with many employees feeding back that it didn’t function correctly on their mobile devices.

Causeway assembled a team who understood its brand and workforce to take the lead on the design and build of the new platform. A modern style was defined and clear structure put in place to simplify navigation and accessibility. Emphasis was to be put on all of the great perks to employees so a customer-focused approach was outlined with monthly promotions. The platform opened up great possibilities for enhanced employer brand recognition so the new platform was given a strong visual identity. Icons were designed to provide clear navigation and the tone, language, imagery, and style used perfectly reflect the Causeway brand, too.

A teaser campaign was used to carefully time a high-impact re-launch and, combined with an ongoing promotional campaign, has ensured huge success for Causeway Lifestyle. Within just three days of the re-launch, 56% of employees had logged into the new site, rising to 97% during the first month. After six months, total spend was the equivalent of $116,000, with an average saving of 9% over 800 orders, an amazing result for a small organization.

All of this has had a hugely positive impact on Causeway’s business outcomes as well. Comparing data from the six months before and after re-launch, Causeway’s employee turnover has decreased by 6% and productivity is improving with sales increasing by 73% and profitability by 35%. While these may not be directly linked to the new platform, based on research it can be reasonably argued that having more engaged employees has contributed to the overall business improvements. Power to the people.

employee engagement with the platform

decrease in employee turnover since implementing the platform