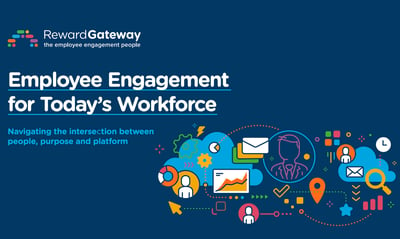 Discover the changing employee engagement landscape and how to better connect with your workforce with recognition and communication tools.

Established in 1993, HomeServe have always had the
aim of being the first place people turn to for home emergencies and repairs. It has a diverse workforce based across all of the UK, including contact centre teams based at three different sites, office based support functions and over 400 field-based engineers.

HomeServe recognised the key challenges facing the company were culture, fairness and consistency, and the amount of field-based people.

Having seen its engagement score fall to a low of 56%, HomeServe wanted to turn this around and instead build a culture to promote "A Great Place to Work" and encourage its people to appreciate each other by saying "Thank You." Fairness and consistency had become a problem after multiple acquisitions led to inconsistent benefits; for example free gym membership was only being provided to people in one of its offices and not others. Field-based engineers did not find it easy to engage with the culture and HomeServe had found resistance when trying to implement new technologies with those teams.

HomeServe recognised the need to improve engagement with an easy-to-use platform that would make its employees feel valued, appreciated and offer everyone a consistent benefit.

HomeServe decided to involve its people with as much of the process as possible and formed a project group to get additional buy-in from the key areas of the company. They ran a competition which led to their employee engagement hub being named "PeopleServe," and the winner received the equivalent of a $90 AUD voucher.

Knowing that it wanted to create a culture of appreciation, HomeServe decided to launch an engagement hub alongside employee discounts and "Thank You Thursday" with Thank You eCards. There seemed no better time to communicate this than on Thanksgiving Day, 27th November. The official launch would then take place a week later on 4th December, and that didn’t give the teams much time.

Seven days prior to launch and the communications went out to HomeServe’s people. Posters went up at every HomeServe site and plasma screens in contact centres were changed to display the important "Thank You Thursday" message. To make sure everyone was kept in the loop, a copy of the poster was emailed to every field-based engineer. People Team email signatures were changed to include the message "HomeServe says Thank You and you can too!" to support the launch even further.

With only two days to go, a brief message was sent to every HomeServe manager announcing the launch and providing them with FAQs about the upcoming changes and new engagement platform. Employee Forum representatives, who would have a big part to play as advocates on launch day, were given early access to the  platform to spot any potential issues.

On launch day, new posters, desktop wallpapers and plasma screen messages all went up to display the URL of PeopleServe. A banner was also displayed on HomeServe’s intranet that linked employees directly to the new platform. Members of the People Team wore red T-shirts with the URL written on the back and the message "Thank You" on the front too. Every engineer was sent a text message drawing their attention to the important email they would be receiving on the same day.

A message went out on the organisation's social network, Yammer, at 12 p.m. to officially launch the PeopleServe platform. Volunteers from the People Team on each site walked the floors to help with registration to its new platform, answer any questions and, of course, hand out chocolates. A letter was also sent to tell everyone about PeopleServe and explain the registration process, just in case they missed everything that happened on the day.

Thanks to such an effective communication campaign, and the bundles of energy from the volunteers on HomeServe's People Team, the launch was a huge success. This incredible effort did not go unnoticed by HomeServe’s People and even before the official announcement on Yammer there had been just over 300 registrations on its new platform.

By the end of the first day, HomeServe had more than 700 registrations which is a sizeable 33% of their workforce, and more than 120 eCards had been sent. More than 65% of HomeServe’s workforce were registered as December came to an end to mark an impressive turnaround in such a short space of time.

Six months since the PeopleServe platform launch and 86% of the workforce are registered, including 60% of the field-based engineers. Almost 8,000 eCards have been sent, the equivalent of $575K AUD has been spent and more than $56K has been saved by its People.

Even after all of this, HomeServe launched a new recognition program, which encouraged more than 120 new PeopleServe registrations. The company's previous attempts to integrate a recognition scheme had failed, but a much simpler reward and recognition process drove engagement by making their people feel recognised and valued for the job they do.

eCards sent on the first day of the program launch