Earlier this year, I had the pleasure of coordinating the panel discussion during the Engagement Excellence Summit between:

The 45 minutes went by quickly and with so many questions from the audience, it was clear a follow-up was needed. I could not have been more grateful that we were able to get the majority of the panel back together to explore additional topics we didn't get to during the initial conversation.

In this follow-up session, Tunde, Geoffrey and Doug talked about the importance of Diversity, Equity and Inclusion (DEI) in the workplace and how leaders can rise to the challenge of starting powerful conversations with their people.

To read the full conversation, check out the full transcript here.

Tunde was asking thought-provoking questions, while Geoffrey and Doug gave their perspectives in the hopes to shed light on how leaders can improve inclusion and belonging at work. Let’s uncover some key highlights from our discussion:

Tunde: Let’s walk through what DIB (Diversity, Inclusion and Belonging) means. The reason for the term 'belonging' is to ensure all colleagues are genuinely included and part of our community, particularly with the challenges of remote working. Would the panel agree/disagree with this broader approach to inclusion i.e. creating 'belonging?' 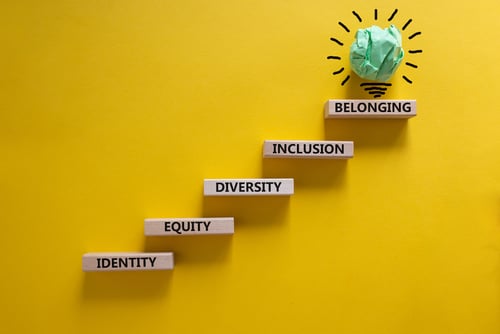 Geoffrey: The difference between inclusion and belonging is, the inclusion piece is recognising that you can leverage and pull in lots of different ideas in creative full processes. You're obviously looking at your gender pay, or you're looking at how many individuals living with a disability you have in your workforce, and making sure you're measuring that, and engaging with it.

I believe belonging is that piece of making sure that all those individuals that come to work for you have an affinity to your organisation.

A lot of the time, when you look at belonging, people will say, 'I belong to my team, but I don't necessarily feel like I belong in the organisation.' It's having that difference of them understanding the purpose that aligns to their values, and that they are able to show up and have their voice heard every day.

Tunde: How can organisations promote initiatives to address under-represented groups in their business without losing that sense of inclusivity for all groups?

Doug: If we're putting a lot of emphasis on one group, are we taking away from another? I really discourage that kind of thinking and discussion. What I will encourage is broader discussion. If someone else or some other group or individual has an issue that they feel is underrepresented, then speak up, and we'll open up that discussion.

For me, it's just making sure everybody has a voice and that the conversation is both a civil one, but also one that doesn't feel as if there's only a singular focus on one party.

Trying to support one group doesn't necessarily mean you're taking away from another. I think it’s key to open up the channels, making it comfortable for people to discuss, but leadership comes into play there, too. Part of my role is partly to communicate my own view on things, but also to just demonstrate that I'm communicating. Because I'm in a position of leadership, I’m basically making it OK for other people to say, or to communicate the way that they want to communicate. Communication is fine, but I think without leadership essentially demonstrating that communication is OK, you might not get as much interaction as you want.

Tunde: If an organisation decides they want to do something in this space primarily focussed around race, and those individuals that work for their business decide they don't want to engage in the conversation, what do they do?

Geoffrey: I think you do a combination of things. You need to try and understand why the employees don't want to engage in this conversation. It's those moments when you already have your engagement survey, looking at the data and understanding what those from the racialised communities are saying within that data.

I then think it's finding those avenues to have confidential conversations, such as listening circles with an external provider so that you're able to create that safe space.

Then after getting those bits of insights, making a decision on what you'd like to achieve. Then putting that back in front of those individuals so that they're seeing that there's action, conversation and a focus that they didn't have to provide.

Sometimes it’s that piece of, 'my business is now asking me for my opinion as one of four people of colour in this organisation.' It encourages me to speak to these individuals, share my viewpoint and then whatever the issue is dies down, then it stops. Then in two years time, it’s 'I'll be back in the same conversation. They don't pay me enough to do this. I don't want to engage.'

Doug: We had a group of under-represented individuals that probably had something to say, but didn't feel like engaging because it wasn't very productive. They weren't feeling productive and I didn't know that. Fortunately, I was able to discuss it with someone in that team and they essentially told me about their discomfort, or the frustrations with even trying to start a conversation. What did we do?

We brought in you [Tunde] to provide, as Geoffrey said, a safe space or to craft a safe area for that particular community or group within the business to speak up and to get their voice heard in order for us to structure something. To structure a way in which they could start the conversation for improvement.

For us, and it's been very, very helpful, it was bringing in a semi-neutral third party if you will, or an outside of the business third party to help create that safe space for people to engage in the conversation. 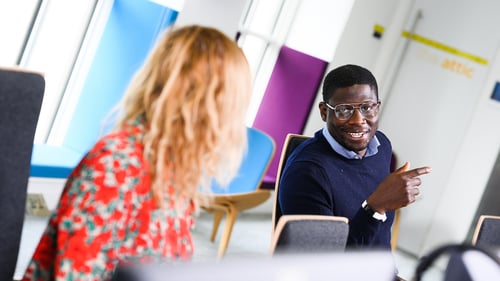 Fortunately we have a business with a lot of people who care about the business, from across the diversity spectrum. We don't have a lot of people working just from 9:00 to 5:00, they're not just punching in and punching out. They’re not saying 'I don't have any time. I don't want to spend any of my personal, emotional time talking about this at work.'

I think for us, fortunately, we have a lot of engaged employees who do bring a lot of emotion to their work.

If Diversity, Equity and Inclusion is an important part of their own personal challenges, then we have a business where it's natural for them to discuss some personal stuff because they're so committed and involved in the other parts of the business. That's a part of the culture.

Tunde: How does a leader decide what current events around race equity to respond to publicly?

Geoffrey: I feel like it's not always about showing up externally. I feel like last year, a lot of businesses put a lot of things out on their websites that they in some instances couldn't uphold or didn't have the mechanism to deliver on. I think it's that piece of showing up for your employees and making sure that they know that you can see what's going on in the world. To me what's more important as an employee and as someone working in the DEI space, is that we understand what our organisation stands for and how it would support the employee base.

Doug: In our business, I communicate with our people all of the time. I put out a blog every week talking about the business and things that are topical. Yes, there’s the extra external discussion – what to comment on either individually or as a business or not, I get that. You want to make sure those things are authentic and helpful. But it’s important to do it internally as well.

I'm thinking about just over the last couple of weeks, and I'm struggling. Whether it's the recent trial results, whether it's the anniversary of George Floyd's killing, whether it's unfortunately the new killings that are happening in the U.S., or whatever has happened globally that is getting publicity. Plus the 'Sewell Report' felt like something you could discuss externally, or even discuss internally, that impacted some of our people.

I want people to know that my door is open to have any conversations about anything, actually.

People can talk to me about many of the other things that are going on, certainly almost every week in the States and to a lesser extent here. I keep my counsel and have those discussions within my circle unless people come to me.

If you’re interested in reading more of our conversation, check out the full transcript here. At Reward Gateway, our mission is to make the world a better place to work. As part of that, our Leadership Team and our employees are committed to having open and honest conversations about how to make the workplace more inclusive for all.

I’d love to hear about some of the initiatives you’re doing at your own organisation, so feel free to send me a message on LinkedIn. If you’re looking for other ways to get your leadership on board or to focus your DEI strategy at your organisation, check out these blogs: 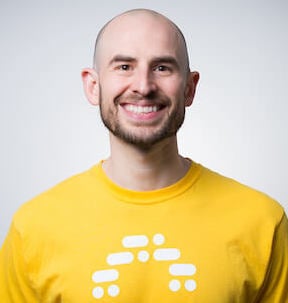 Jonathan Burg is the Group SVP Marketing at Reward Gateway. If he could eat only one food for the rest of his life, it would without a doubt, be peanut butter.

Kameel Martin is a Senior Client Success Manager for a wide range of businesses. She always has communications and marketing on her mind, and loves to share knowledge with anyone interested in improving employee engagement!