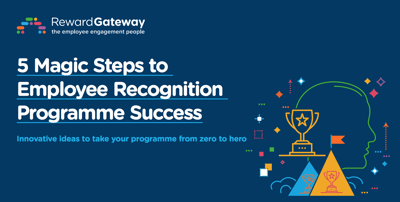 Discover employee recognition best practices and learn how to define your recognition strategy, choose a name and prove the ROI of your programme.

Reed Specialist Recruitment, the largest family-owned recruitment company in the world, provides permanent, temporary and contract recruitment solutions, and has 2,200 employees, or Co-Members, across 91 offices across the UK. The recruitment industry in the UK is a highly competitive growing market, attracting a multitude of new entrants who can offer bespoke, tailored rewards and benefits to their staff.

The main challenge for REED was changing its reward culture, which was heavily skewed towards commission and bonuses, which ultimately led to short-termism amongst its workforce. In addition, internal satisfaction surveys showed that employees believed they were offered few benefits and they were hard to find.  Although the team at REED improved many commission structures the previous financial year, they hadn’t seen an improvement in satisfaction levels and Co-Member retention. There was a recognition that the reward culture needed to change and Co-Members needed to see reward not just as pay, but as everything they get from working at REED – their Total Reward Package.

The team concluded that they had an unsustainable reward model and improving its benefits offering would be more cost-effective than increasing pay. By adopting a more holistic approach to reward, Co-Members would be more engaged, satisfied and feel more valued.

REED had never had a clear benefits strategy, so the team reached out to other HR & reward professionals and companies they met at various networking events. It quickly became apparent that effectively communicating benefits was one of the most challenging aspects of a benefits strategy. Therefore, it was essential to form a thorough and strategic communications plan to accompany the relaunch of employee benefits.

In terms of communication, the team faced two main challenges. Firstly, there was no budget, so costs would have to be as low as possible. Secondly, the workforce was spread over 91 offices across the UK, and communications often didn’t reach all Co-Members.

However, knowing how essential a strategic communications plan was, REED had the primary objective: To increase Co-Members’ knowledge and understanding of the benefits available, increase the uptake of benefits and through that, attempt to increase Co-Member satisfaction and engagement.

After researching best practice, the team created a communications plan for the next REED financial year and mapped out the content and channels they would use. To communicate new benefits, improvements to existing benefits and competitions to encourage engagement, the team worked with Reward Gateway to create a new benefits platform, called “Reward Hub.”

The team shared the plan at its annual HR strategy meeting and it generated enthusiasm and new ideas. In order to get the information to as many Co-Members as possible, the team used a mixture of intranet news articles, emails, posters and flyers. Also, Personal Assistants of departmental heads added a benefits section in periodic newsletters to reach the entire network.

The team held presentations, conference calls and webinars in the first half of the year to communicate the new reward platform and new benefits (which included employee recognition, employee discounts, Childcare Vouchers and employee wellbeing). For Co-Members who couldn’t attend, content was shared with managers to cascade to their teams. Due to budget constraints, the team utilised existing channels of communication; emails, intranet news articles and awarding small prizes for internal competitions.

To reach Co-Members when they’re out of the office and to appeal to the millennial generation of employees, the team heavily promoted usage of the Reward Hub app and the SmartSpending™ discounts app. This tied into the wider business strategy towards mobilisation.

As part of the plan to increase engagement with external communications, the team created a two-page benefits document for applicants. They also changed the on-boarding material to a complete benefits booklet to send out to new starters in the post. This ensured that all Co-Members started off their REED journey with awareness of their benefits package from day one.

The strategic communications efforts resulted in an immediate increase in the benefits uptake across the board. Benefits are now highly accessible to Co-Members regardless of location and there’s been an increase of five times the previous amount of engagement with the number of registered users browsing the site. The #RewardsatReed LinkedIn photo competition ran from November 2017 to December 2017 and generated over one hundred submissions.

And externally, there’s been an increase in REED’s Glassdoor rating, which supports that Co-Member satisfaction and awareness of the Total Reward Package have both increased. Between October 2016 and July 2017, the average Glassdoor rating was 3.7. As of October 2017, the score rating has been climbing and is now at 4.1. The team is even seeing more reviews being left on Glassdoor after improving the benefits and their visibility.

Additionally, a higher number of employees now state they feel more valued and that their opinions matter, resulting in a higher score in employee experience. After only a year of launching Reward Hub, there has been a renewed interest in REED’s benefits package and has led to the introduction of an annual benefits survey which allows employees to voice their opinion and propose new benefits for the Reward Team to evaluate. With continuous feedback, the team will strive to introduce new benefits that are in line with the strategy and meet the needs of REED’s workforce and organisation as a whole. Currently, Reward Hub’s ROI is sitting at £126,700 YTD and counting.

increase in user logins on the platform

ROI year to date and counting