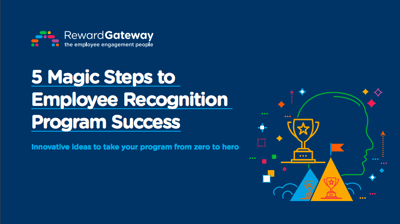 Discover employee recognition best practices and learn how to define your recognition strategy, choose a name and prove the ROI of your program.

With over 25 years experience and over 65 projects around the country, PYBAR Mining Services is one of the largest underground hard rock mining contractors in Australia. The majority of PYBAR’s employees operate in remote and underground mining project sites and the organisation wanted to look at what it could do to set itself apart as an employer of choice.

In 2015, PYBAR’s HR team started running annual employee surveys to gain an understanding of what their people were looking for from their employers.

“The biggest thing that came out of those surveys was that we didn't have enough communication from top to bottom and that we had no recognition of service,” says Cara Jordan, PYBAR’s HR Advisor. It became clear that many employees weren’t aware of other project sites and the achievements or opportunities available to them around the business. This, paired with lack of recognition and benefits while working in both physically and mentally demanding roles was affecting retention and overall employee engagement.

The organisation put several tactics in place, including recognising years of service with a certificate, polo shirt and limited edition item, and a peer-led award nomination programme, but it was cumbersome and employees felt as though their moment of recognition had passed them by because it took so long to get their items.

But while employees appreciated these initiatives, the geographically dispersed workforce meant communication was still a big hurdle. “Managing and administering physical rewards also meant most employees experienced a delay in receiving the service recognition items or gift cards as well as company updates."

The organisation wanted to find a programme that would combine their recognition programmes with some of the new communications initiatives they’d put in place like a quarterly newsletter mailed to their homes, plus show appreciation for their staff through better benefits.

Finding a platform that addresses the unique requirements of a predominantly blue-collar, offline workforce is a challenge, but when someone internally recommended Reward Gateway, Cara knew it was worth looking at. In particular, she was drawn to the level of customisation and tailoring that could be done to make the platform look, feel and sound like it was by PYBAR.

To reach its largely offline workforce, PYBAR worked with its marketing team and Reward Gateway’s Implementation Team to design an all-in-one communications, recognition and reward, and benefits hub, which they launched as PYBAR Perks.

They decided to use PYBAR employees in the photos for the homepage and eCards, which got more people involved and generated excitement about the initiative.

To launch the programme, the HR team filmed a promotional video and visited the different project sites around Australia to show employees what they had in store and demonstrate how to access the hub via computer and the smartphone app.

To encourage participation they ran a promotion where employees who signed onto the platform before a certain date received credit in their PYBAR Perks account and also published information in its quarterly newsletter so family members who received it in the mail were made aware of the initiative and how to access the discounts.

Now, employee recognition and rewards can be managed and redeemed instantly through PYBAR Perks. Employees can “High Five A Mate” whenever they see someone demonstrating PYBAR values and receive their service recognition and birthday greetings online via eCards which are published on a social recognition wall.

Employees can also nominate each other for the monthly CORE awards both at the project site and online, and instead of waiting for a physical gift cards to arrive in the mail, award winners can redeem their $100 award instantly at hundreds of retailers where employees also get a range of discounts.

In the first six months of the program launching, employees have recognised each other over 450 times using PYBAR Perks, giving each other virtual high fives and publicly acknowledging each other for their service.

Employees are also using PYBAR perks to access discounts at popular retailers and save big on everyday items, accumulating over £4,000 in savings in just the first few months.

The communications tools have also proven powerful. Used in combination with the quarterly print newsletter and SMS notifications that contain a link to important announcements and blog posts that are published on PYBAR Perks, the transparency and flow of communication between management and employees has continued to improve.

in savings in the
first few months
and counting

moments of recognition in first 6 months of launch

Speak to an engagement consultant: