DataBank Ltd. is a data centre and managed services company that provides mission-critical IT infrastructure to enterprises, technology and content providers from 60+ facilities in 29 markets in the U.S. and Europe. After going through multiple acquisitions, the organisation was looking to bring their newly defined brand and culture to life and sustain it with the help of a digital, centralised platform to connect and unify all employees.

DataBank has a dispersed workforce, with the majority of its staff working in the data centre facilities across the U.S. and Europe, and others working from home due to the pandemic. Breaking down silos and maintaining a coherent and consistent culture became key, especially when people weren’t able to collaborate or connect in-person after the latest acquisition which caused DataBank to triple in size. Building a culture of appreciation that was tied to the company’s goals became a priority.

Prior to working with Reward Gateway, the team at DataBank didn’t have a formal recognition programme in place and with hundreds of new employees joining the team, it was time to bring everyone together with a centralised tool that connected people to one another, the values and the culture.

As in many integrations, the first year is spent doing a lot of work around systems, products, and financials. Culture can sometimes be overlooked or left to integrate organically, leaving organisations without the feeling of being 'one company' after a large merger.

JP and the team at DataBank hosted employee surveys and round table discussions in each of the markets that they operate in, alongside leadership summits with about 20 senior leaders. In these workshops, they used the company’s Purpose, Way and Impact (PWI) framework – which is a modern alternative to mission, vision and values – to craft foundational messages, identify the company’s archetypes and define what are now its three Cultural Cornerstones and four Leadership Behaviours.

With the help of the Reward Gateway team, JP demoed the engagement platform to the CEO and CFO to make sure they were bought in and understood how this would amplify the work they did to build the archetypes and behaviours behind the newly clarified brand and culture messaging. The CTO was also brought in to check the box on security systems and integrations on the backend, including Single Sign-On, Slack and Office 365.

It's critical to have those messages and those behaviours and for there to be buy-in across the organisation, people need to feel like they're meaningful. If you have that then the Reward Gateway platform becomes incredibly powerful.

Once these stakeholders were bought in, the marketing and HR teams collaborated with Reward Gateway’s Implementation Team to build out the platform and bring everything to life on 'The DataBank Vault,' the internally rebranded Reward Gateway site.

Prior to JP joining, DataBank did not have any formal company-wide reward and recognition programme in place. There were some departmental recognitions that were done with ad-hoc gift cards and emails for general things like teamwork, but these weren’t connected to the culture or tied to the archetypes, nor was it centralised across DataBank’s sites. Now, with the right culture drivers in place, there was a foundation of behaviours that could support a company-wide reward and recognition programme, but the team needed a framework around which to structure one.

JP adds, “This is where Reward Gateway's Client Success Team became a huge asset to us as we were building this out. I have to give a huge shout out to Klara Owens and Jeff Sanchez, at Reward Gateway, for their help here. They provided us tons of best practices and content to dig into this and helped us think through the question ‘what could a reward and recognition system look like?’”

Working with Reward Gateway, JP and the team created a tiered-recognition approach focused on the three Cultural Cornerstones and the four Leadership Behaviours, including:

Alongside reward and recognition, DataBank uses the Vault as a critical organisational communication hub housing employee blogs, each with a different purpose and message for employees, plus regular updates on changing workplace policies, new hires and other important news.

DataBank has leveraged the employee survey capability, tailoring them to address various organisational needs. The team has used a combination of both serious and playful approaches to keep employees engaged. They moved their bi-annual, all-employee survey over to the platform, which helps the team keep a pulse on company culture and employee satisfaction over time. On a lighter note, the homepage changes every two weeks and showcases a new poll to increase participation – one of these asked employees what superpower they would choose.

To round out its offerings to employees and extend their disposable income, the team launched employee discounts on the platform. Employees can save through discounts at top retailers and earn Cashback on categories like home improvement, fashion and entertainment. 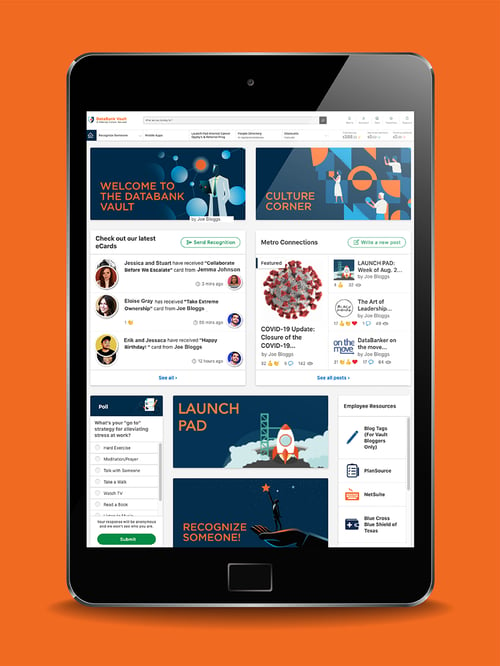 The internal communications tools are helping connect DataBank’s hybrid workers. Over the past year, there have been 28.8k total views on blog posts, 2.66k reactions and 723 comments, demonstrating an increase in engagement, particularly with the post-integration Forward Together blog. This demonstrates how newcomers to DataBank are easily getting up to speed with company updates through the platform.

JP adds, “Today, people just love using The DataBank Vault, recognising each other, commenting on the Kudos and awards, or the blog posts. I couldn't be more pleased with the adoption and the way it's really taken on a life of its own.”

Coming together through mergers and acquisitions means there's naturally silos that take place geographically, but also functionally. With reporting capabilities, admins can take a closer look at what’s working and what needs improvement. “The reporting features allow me to see everything from the number of logins, to how much people are saving using the discounts. The report in particular I love and look at regularly allows me to see how the peer-to-peer recognition is flowing across the organisation, and in this case between four major departments, which are reflective of how we come together as one company. It's allowed us as leaders to really continue to keep a finger on the pulse of that culture on a daily basis and figure out how to nurture it in a positive way,” JP says. Being able to see which groups are recognising other teams and how that recognition is flowing across the organisation informs JP and the team on where to invest a little bit more time to encourage cross-departmental recognition across hybrid team members.

How does DataBank measure results? The two key indicators they measure, amongst a host of other engagement metrics, are an employee net promoter (eNPS) style survey question and the recognition activity on the Vault. In 2019, DataBank hosted a culture survey to measure employee satisfaction and asked employees to rank their response to the question 'I would refer DataBank as a place of employment to friends,' on a scale from strongly disagree to strongly agree. The team hosted the survey again in 2020 and in 2021.

Since acquiring new team members and launching the platform to drive a more cohesive culture in 2020, the percentage of employees who answered 'strongly agree' has increased by 16%.

Before The DataBank Vault, there would be few informal recognitions a month across the entire organisation. In 2018 before using the platform, there were 55 total Kudos sent. Fast forward to 2020, there were 1,599 Kudos sent – resulting in an astounding 2,800% increase in recognitions. And this number continues to increase. 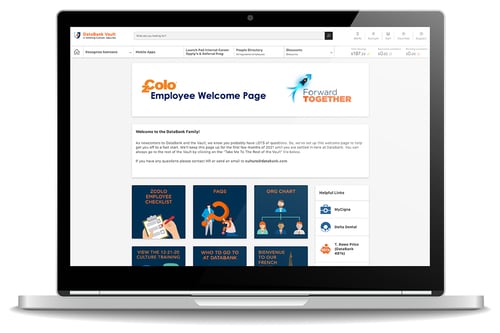 On the welcome hub, new employees were greeted by an employee checklist, FAQs, an organisational chart, training on The DataBank Vault and a poll about how well new joiners felt about the Cultural Cornerstones and Leadership Behaviours, with the option for more training.