Royal British Legion (RBL) is a national charity that provides financial, social and emotional support to members and veterans of the British Armed Forces, their families and dependants. The organisation employs a workforce of 1,700 staff across the UK, many of whom don’t use a computer as part of their day-to-day role. As such, its HR team were looking for a flexible benefits platform that would strengthen its Employee Value Proposition beyond pay and connect its entire workforce, from care homes and nursing staff to HR and regional operations.

Royal British Legion approached Reward Gateway in September 2020 having underlined the need for an employee benefits platform to drive stronger engagement among staff and deliver a simple user experience that every member of staff could buy into.

Before this, RBL’s benefits system was a cluster of unconnected services that needed to be accessed and managed separately. Although this system did the job for the most part, it relied on a lot of additional authorisations and meant that the organisation’s HR team couldn’t promote a unified benefits offering to their workforce.

As such, it had proven a challenge to make sure every member of staff was aware of, and had easy access to, its full range of fantastic initiatives. Led by Ian MacFarlane, part of the Learning & Organisational Development team, RBL also made it clear they needed a platform with inherent flexibility, so they could tweak and add new functionalities as their approach to engagement evolved. In other words, it needed to be future-proof enough to underpin the organisation’s strategy for years to come.

“Before partnering with Reward Gateway we had a few separate relationships with external benefits providers, but no central platform to manage everything. We wanted that platform to be accessible and engaging for all our staff, and give us a better chance to connect with teams that don’t work with a computer. Our new system does all this and more – so much so that I’ve already recommended Reward Gateway to two other organisations I’m in contact with!” says Ian. 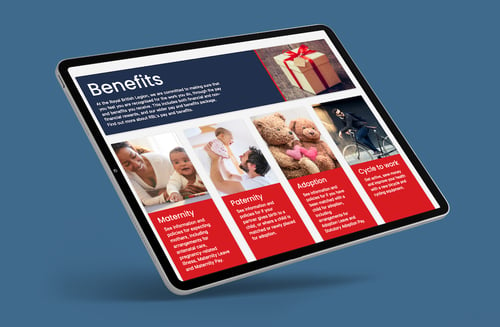 The first step was to custom-build an employee benefits platform that brought key initiatives such as Cycle to Work and SmartSpending™, an employee discounts and cashback programme, under one roof. Named ‘Rewards Hub,’ the platform makes it simple for staff to see the full range of benefits on offer and easier for managers to track and approve applications where needed.

Ian’s team had the bright idea to channel people to the platform through a Holiday Trading initiative, establishing a 6-week window on the system whereby staff could buy extra annual leave for the following year. This turned out to be a fantastic tactic to get people used to navigating the new system while also driving greater awareness of the organisation’s wider Employee Value Proposition. RBL also needed to segment the availability of Holiday Trading on the platform, so that employees wouldn’t be able to access the benefit until they had passed their probation period.

Ensuring a seamless interaction between the platform and RBL’s main HR database was another important factor, making sure that employee data automatically syncs and stays up to date at all times. This data then feeds directly into the system’s calculations, removing the need for Ian’s team to go back and forth to input, check and update information.

“A lot of our care home staff don’t have access to an IT system in the workspace, so it’s been really useful to have a mobile app which they can download straight to their personal phone and use when they’re in the supermarket. We’ve found it only takes one person to start saving £10 a week on their food shop, or get money off their new washing machine, before they start chatting to their team and spreading the word. The engagement among our office staff has been really strong too, mainly because everyone can access the hub within just a few clicks on every company laptop or computer, or their own phone.”

Planning for the future was a key driver for Royal British Legion when choosing the right system and the company made it clear from the outset they wanted to continue identifying gaps and building on their initial benefits offering.

Ian’s team worked closely with Reward Gateway to tailor a rental deposit loan initiative specific to RBL’s needs, which offers staff financial support whenever they’re making a move to a new rental accommodation. Although this isn’t a daily occurrence, it’s already proving a big help to employees that are looking to move house. RBL’s season ticket loan benefit also helps to make travel more affordable for employees that face a regular commute as part of their role.

In just over a year since launching, employees have spent over £239k through the platform, saving £16k on purchases at retailers such as John Lewis, Sainsbury’s and Tesco. Holiday Trading has also proven to be a huge success across all levels of the organisation, with a total order value of £115k.

Ian and his team have done remarkably well to get more than 1,500 of their 1,700 staff registered on the platform so far, 66% of which are active users. This stat is even more impressive when you consider the majority of employees don’t use a computer as part of their job role.

While it’s still early days in RBL’s longer-term plans for the platform, employees across all 10 of its main business units are signing up and engaging with an unrivalled range of benefits – which was underlined as one of the organisation’s main objectives at the start of the project.

“We had a set of four main criteria in mind when investing in a new platform: accessibility, value, responsiveness and longevity. Reward Gateway ticks all of these boxes. Our people love using the system because it’s so easy to navigate and it gives them a simple breakdown of exactly what they can get. There’s still more work to do over the coming years but I know we’ve partnered with the right provider to make it happen!”